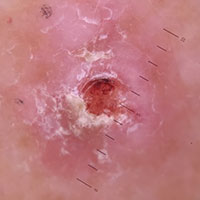 SCC is one of the most common cancers in Australia, and accounts for around 15-20% of non-melanoma skin cancers and approximately 350 deaths in Australia each year.

It arises from the flat (squamous) cells in the uppermost layers of the skin (known as the epidermis) and generally occurs on the most sun exposed areas (head, neck, hands, forearms and lower legs).

When treated early the vast majority of Squamous Cell Carcinomas are not life-threatening.

Solar keratoses can develop into SCC

There are different subtypes that present differently and are treated differently:

This usually presents as red scaly patch and may be treated topically with a number of creams, cryotherapy, superficial surgical techniques and photodynamic therapy. Sometimes a biopsy may be needed to confirm that there is no more invasive SCC.

This a rapidly growing lesion that warrants surgical removal. It does not spread to other parts of the body and will often resolve

This is generally a thick crusty lesion that will often ulcerate. Spindle sell cancers and poorly differentiated SCC are the most aggressive forms and the most likely to spread to other parts of the body. Treatment is by surgical excision with a clearance margin to ensure no cancer cells remain.

Radiotherapy may be used to treat SCCs in areas near the eyes or on the nose or forehead, or other areas which are difficult to treat adequately with surgery.

SCCs on the scalp, nose, ears & lips are especially troublesome, with higher rates of recurrence and with these recurrences typically taking place within the first two to three years following surgery.

Anyone who has had one SCC has an increased chance of developing another, especially in the same skin area or nearby. That is usually because the skin has already suffered irreversible sun damage.

2021 © Elements Skin Cancer Clinic
This email address is being protected from spambots. You need JavaScript enabled to view it.